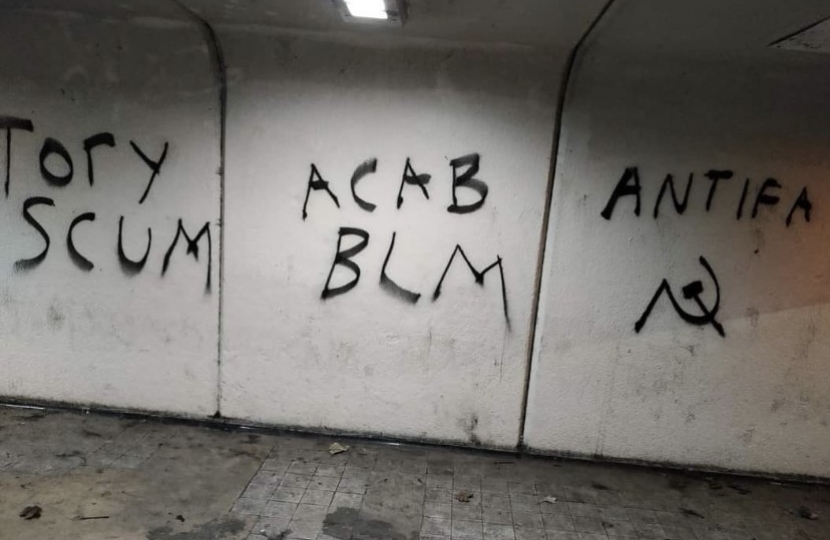 Washington Conservatives have condemned a spate of graffiti and fly-posting by an association which calls itself the Anarchist Communism Group.

Underpasses, street furniture and lampposts in the Washington South Ward, which the Conservatives gained at the 2021 local elections, have been tarnished with graffiti and stickers which bare the ACG’s website address.

The graffiti includes the hammer and sickle – an internationally recognised symbol of communism, the anti-police acronym ‘ACAB’ which means ‘all cops are bastards’, and stickers which say ‘Fuck Cops’ and encourage people to ‘hunt Tories’.

This is the second time that graffiti of this nature has appeared in the Washington area.

“It is very concerning to see this left-wing graffiti and propaganda being posted across Washington, especially so close to schools.

“These people seek to provoke hatred by dividing residents.

“Fortunately these views are rejected by the vast majority of residents who are sick and tired of this sort of playground politics and vandalism of our community.

“The last two years have shown us that residents will come to support each other regardless of who you are.”

“Given how stretched local council were during the Coronavirus pandemic, it’s a huge drain on resources cleaning up the mess left by these individuals.

Conservatives in Sunderland have slammed the proposal to introduce parking charges at the Stadium of Light on non-match days as ‘short-sighted’ and ‘poorly timed’.