Our Political Moments of 2020 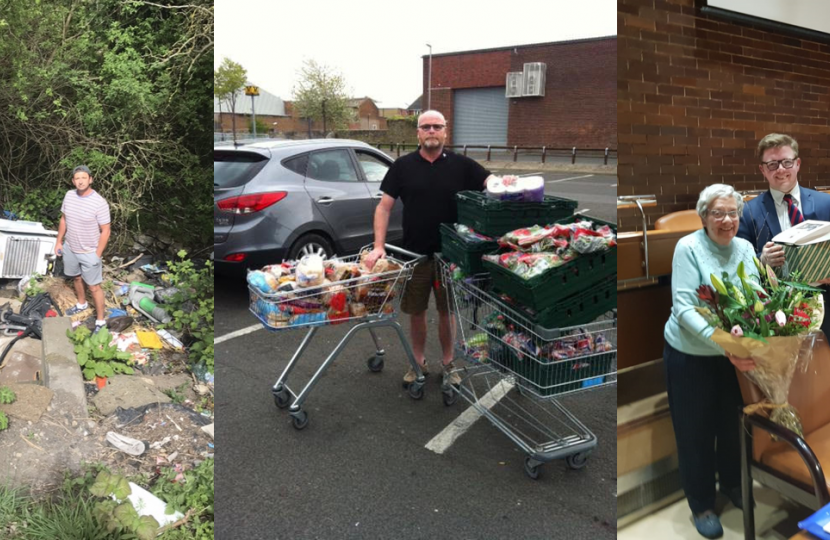 Sunderland Conservative councillors and candidates have reflected upon what has been an unprecedented year of lockdowns, government intervention and public health worries. Here they share what they think has been the defining moment of local politics in 2020.

2020 was the year that the UK left the European Union. The occasion was marked by a visit from Prime Minister Boris Johnson, who held a meeting of the cabinet in the National Glass Centre and then attended a function with supporters in the Stadium of Light. Boris restated the government’s commitment to Sunderland – and since then we have had funding to regenerate the train station, build new roads, and to pay for new school buildings. James Doyle chose this as his highlight of 2020.

“There is no rat problem in this city!”

When the Conservatives put forward a motion to full Council calling for more action to be taken to combat rat infestations across the city, we did not anticipate that Labour would vote against it. As if this was not damaging enough, new Labour Deputy Leader, Paul Stewart, then declared “there is no rat problem in this city”. Simon Ayre has been campaigning for more rat baiting in Hendon, and he has chosen this as his moment of the year.

The Sunderland Conservatives held a series of litter picks as part of Keep Britain Tidy’s Great British Clean scheme. We tidied up areas of the sea front in Fulwell and Roker, local parks, and residential areas. One of our litter picks was in the Wearhead Drive area in Barnes Ward. Helen Greener chose this as her moment of the year.

Our Association AGM in March 2020 saw the retirement of several party officers. Among them was Olwyn Bird, whose commitment to the Conservative Party is unrivalled. She had served as Deputy Chairman (Membership) and, latterly, as Washington Constituency Officer. She continues her involvement with the CWO, but her resignation from the Management Board marked the end of an era. This was Antony Mullen’s moment of the year.

For much of 2020, Roker Park was plagued with rats and the St Peter’s ward team was inundated with complaints. Sam Johnston’s moment of the year was when Northumbrian Water Limited, under pressure from our team’s lobbying, agreed to undertake sewer baiting in the Roker area to stop the rats entering the park from the sewers.

During the first national lockdown, Conservative councillors and candidates across the city set up support schemes to help elderly, vulnerable and shielding residents. This included the delivery of groceries, prescriptions, and hot meals to people in need. Michael Dixon’s highlight of 2020 was being able to share some of these stories at a meeting of the full Council, especially Michael Hartnack who has delivered over 14,000 meals to Sunderland residents since April.

St Anne’s candidate, Greg Peacock, asked the Council to clear the masses of fly-tipping in a drainage culvert in the ward. When they said no, he took matters into his own hands. Greg’s moment of the year was when teamed up with local volunteers and cleaned the fly-tipping up himself, including old fridges, vacuum cleaners and garden equipment.

2020 was the year in which the Conservative Group elected a new leadership team. Robert Oliver stood down as Group Leader and announced that he would not contest the 2021 local elections. The Conservative Group subsequently elected Cllrs Antony Mullen and James Doyle to serve as Leader and Deputy Leader, respectively. Jack Simm nominated this as his moment of the year.

Throughout the year, Chris Burnicle has supported residents of St Chad’s with food parcels. His moment of the year was when ward colleague, Cllr Dominic McDonough, donated his councillor allowance to charity in support of those who in greatest need during the first national lockdown.

2020 was not a good year for the local Labour Party. Graeme Miller sacked his deputy, Michael Mordey, when he suspected that Mordey was plotting to challenge him for the top job. A leaked letter revealed that Miller had branded Mordey “disloyal” and “duplicitous”. In the letter, Miller also said that Labour’s top priority was staying in power – a bold thing to say when the rest of us were supporting our communities during a pandemic. Craig Morrison, who is standing in Miller’s Washington South ward in 2021, chose this as his moment of the year.

Michael Hartnack’s moment of the year came when over 110 people signed up to his People Helping People scheme – initially based in Fulwell, it soon became a city-wide support scheme. Michael and his team have set up a foodbank, delivered over 14,000 meals, and provided toiletries and supplies to care homes in need. Over Christmas, Michael will provide 235 Christmas dinners to those in need.

Visitors to Marine Walk will know that its often difficult to find places to park. Unfortunately, illegal parking and congestion has been a problem for many years. Josh McKeith’s moment of 2020 was the approval of new parking spaces to be added to the existing car park which will alleviate the problems that his residents in St Peter’s Ward have been concerned about for so long.

This year the St Michael’s Ward councillors used their Walk and Talk budget to invest in a tree planting programme. The award of £3,000 will fund 20 new trees being planted in the tree-lined avenues of Ashbrooke, including Queen Alexandra Road, to return the streets to their former glory. The launch of this initiative was Robert Oliver’s moment of the year.

As if Michael Mordey’s sacking wasn’t bad enough for Sunderland Labour, Michael Essl went and lost a libel case after he falsely accused a member of the public of being a paedophile. Essl had to pay out £20,000 plus costs and was made to issue an apology to local businessman, Len Lowther.

The independent investigation into alleged discrimination in the Party has now concluded.